The kidsplaybook website has been updated. Kidsplaybook.com is now SSL-compliant (https) and responsive to all phones, tablets and computers.
The Kidsplaybook App is currently undergoing maintenance and will not function properly.

November: I added 165 new games from many countries all over the world.

In May a new exhibition was officially opened, called ‘Toy stories: intercultural playheritage’.Some of the games I filmed were presented here. (www.speelgoedmuseum.be) 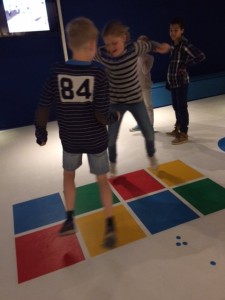 In January and February 2015 I filmed in Myanmar (Burma), Laos and Cambodia.

I was invited at the w00t.dk Play Festival in Copenhagen.

I travelled through China and Hungary.

A short trip to the USA and it was not always easy to get permission to film at schools over there, but I’ve found some street games.

I was also filming in India and it was very special to be there.

I travelled by train from Beijing southwards into China. I visited several cities and some small villages.

It is Jules Oosterwegel's passion to document games that are played on the street by children around the world and to preserve the cultural heritage of street games.

And to pass it on to many generations to come!

Have a nice Play Day